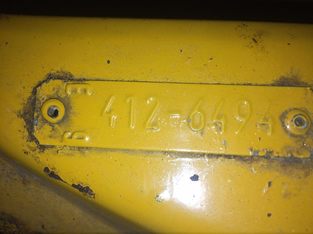 Do you want to know the date of production of your jeans, well now you can, the E9 clearly stated shows it's a jeans beetle painted in Tunis Gelb and was only ever used on the jeans.
We've come to the theory that the production plate was the intended date of manufacture, and the birth certificate showing the completed car date, and release date from the factory, from early records so far it seems most UK Jeans were built on a Tuesday, as more numbers come in we'll have a clearer picture


A note on the above E9 code, the '75 Jeans were also indicated to be painted in tunis gelb so may have the E9 stamp, but we have yet to find one, the only way to verify original jeans would be with the VIN number and that should start 114 2 ###### along with other checks, i.e short headlining, no vents in rear quarters & plain body coloured dash, would be good starters.

Production plate date codes should probably fall in the range of 362-#### to 454-#### this is only a theory from the data we've collated, I'd like to be proved wrong, but feel that with the above we're correct.

If you would like us to date your jeans simply fill in the form on the join us page, and we'll get back to you with a date, if you don't have the production plate we can still date it via the vin number as we have a good reliable database now built with 100% accuracy.
Note: European jeans owners we can date yours too, but the database isn't as full yet to give an exact day without the production plate, but bear with us we're getting there. 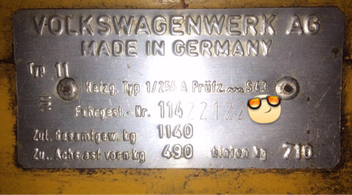 Next let's move onto the VIN, as can clearly be seen the VIN states "MADE IN GERMANY" but we know that the UK Jeans were assembled in Belgium, but more than likely the body pressings were indeed stamped in Germany, one sure way to check is to look at all the glass on the jeans it should be etched with "Be" short for Belgium.
The date range stated from records is from 15-09-73 to 16-11-73, but we've dismissed that range for now as we've got cars on the register dated from the 4th September through to 8th November of 1973, as of yet we can't find any for the last week as the German records state.
The VIN range currently starts 114-2-0510## to 114-2-2383## that's not to say these are a definate range as more VIN's have yet to come in, but can safely say that the majority will fall in the above range.